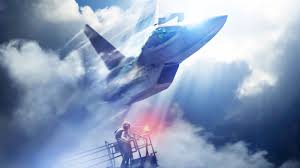 Ace Combat 7: Skies Unknown Missions 06 and 07 have shown off some new gameplay videos that show off the first half of each mission and the mission briefing. Fans of the long-running series are stoked about this, as there hasn’t been a new Ace Combat game in a long time.

The video for Mission 06: Long Day shows the gameplay in a desert where you need to attack a Erusean base. The F/A-18F Super Hornet is rendered in glorious detail fully loaded with AQQM missiles and some 360 degree visuals to show off the plane before takeoff.

There’s some convos between you and your squad as you’re prisoners forced into this mission. Do fans get some backstory about the game. The player also spends a lot of time in low-flying areas so there’s a lot of dangerous flying about. The visual detail is superior to all previous AC games.

As for Mission 07: First Contact, the mission brief tells you how useless you are as a convict. Your goal is to help your allies escape by destroying enemy towers, radars, and AA turrets in a mountainous valley. You get to use the F-22A Raptor and the same set of AQQM missiles.

The area is cloudy as the weather has an overcast on the mission area. There will be clouds, light rain, and other various weather distractions making your mission slightly more difficult. You’ll see a cutscene mid-mission where drones attack and a thunderstorm also can screw with your UI.

For any Ace Combat fan, the gameplay of Missions 06 and 07 has gotten a lot of attention. Fans seem to be praising the game so far from the comments in the video and grateful for the nostalgia this game has brought them over the decades and glad that this game is making a return.