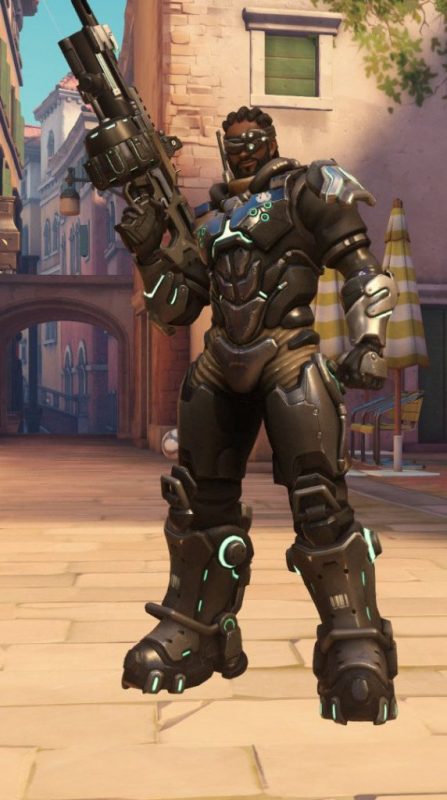 Baptiste, the 30th hero to the game, went live today with several new changes to the game’s mechanics and many hero overhauls for this new patch.

Starting with Baptiste, he’s an independent solider type who served in Talon and the Caribbean before going out on this own. He plays as a Support role with a mix of combat abilities and healing moves. His primary is the Biotic lander which shoots outbursts in 3-rounds which deals decent damage and healing ‘nades for his allies.

He can do Regerernative Burst, which will heal him and any allies over time. His Immortality Field shields anyone from being killed, but the drone that provides this shield seems to be super easy to take down. His Exo boots also allow him to soar through the skies by crouching before he jumps (Luigi?). And his Application Matrix will be his Ultimate- which allows any shots fired through his ulti to do extra damage.

Baptiste will have a few legendary skills with his launch. Personaly, I think the Spec Ops Legendary Skin looks the best out of the bunch compared to the Desert Ops, Buccaneer, or Pirate. The latter two don’t seem to fit his demeanor.

Regardless, here are the patch notes for Overwatch:

Beam-type damage for the following attacks is now reduced by 20% when hitting armor:

Furthermore, the following effects are no longer mitigated by armor:

Damage Boost is now applied when a projectile is fired rather than when it impacts a target. This change was likely instituted thanks to Baptiste’s new Ultimate ability.

Knockback distance is more consistent and less influenced by the target’s momentum. Moreover, flying heroes (such as Mercy while using her Valkyrie Ultimate) can now be knocked back and/or slowed.

Finally, the Overwatch March 19 patch has made some minor changes to a lot of heroes. Here’s the list: