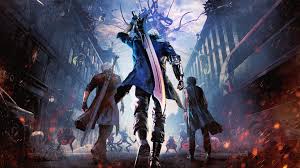 Devil May Cry 5’s newest patch on PS4 now has the censored scene in the US removed.

However, the newest update has now changed this for the US market. Patch 1.07 for DMC5 for PS4 has removed the light that covered up partial nudity of Trish during the game’s cutscene going into Mission 12. The PS4 version is now the same as the PC/Xbox One versions which never had this censorship to begin with.

However, the patch has only removed this from the game in the US. For EU players, this scene still contains the light that covers her backside. This hasn’t been discussed as to why by Sony or Capcom so far. And it’s very strange.

Regardless, we’ll have to see how this story turns out. Players will definitely be fighting for the uncensored version and we’ll see how far they’re going to take this. Or perhaps Sony will come out with an explanation at some point.

DMC5 is currently out for PS4, Xbox One, and PC. There was also a new free DLC update recently released.