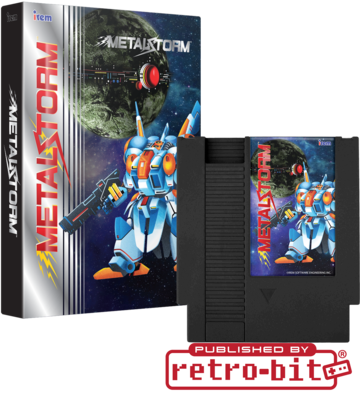 Limited Run Games will be coming out with Metal Storm on 9/17.

The game will be a “limited run” meaning that you’ll only have a certain time frame to snag it. That’s what they do. And they do it best.

Metal Storm is a game that was released for the NES. They took the original JP release and translated it to English. The game will also have the white mech, new cinematics, and even harder difficulties.

I’ve never played this game before, but it’s always one that old-school gamers of mine recommend. Of course, Metal Storm was never popular here in the States. But now a very specific demographic will be very happy.

There’s a standard edition which has a Twilight Black Metal Storm cart and a collectible retail box with a poster and manual.

There’s also a deluxe version, which has a bunch of extra stuff like a collector’s box, retail box, prints, poster, pin, certificate, colored manual, figurine, and only 3000 copies will be made.

I’ll be picking up the SE when it goes live in just a few hours from now so I can be cool.

You can check out NES repro here.