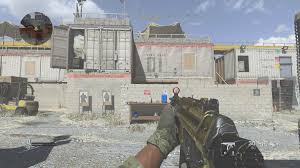 A bug discered in Modern Warfare lets players hide under a building in Shoothouse, which basically lets them snipe players by clipping through the floor.

Modern Warefare is no strnger to bugs, as many have been discovered and patched. But this one is a game-breaker.

Shoothouse was introduced as a smaller map due to the criticism from players bashing Infinity Ward for their overly sized maps.

The glitch discovered on Shoothouse breaks the game completely and destroys it, rendering it unbalanced.

A user on Reddit posted this bug earlier today for visibility with the notion of “so this can be patched ASAP.”

This is the first online exposure of the bug to a wide audience, as it was relatively unknown by many. The user recorded a clip of the user hiding under the building in Shoothouse killing him as he runs through the cargo crates.

The post has now collected nearly 22K upvotes with over 1K comments on Reddit. And it was only posted this morning. So MW players are all over it.

From the clip, it looks like he was killed out of nowhere, as the abuser is hiding under the floor.

But when the screen turns to the killcam, we can clearly see that there’s a Rank 155 hiding under the entire map- clipped beyond eternity.

Being clipped like this offers the abuser unlimited “god mode”. Other players in the same game quickly caught on.

Shoothouse is a popular map for MW, so this should be patched relatively quickly before many others start abusing the glitch.