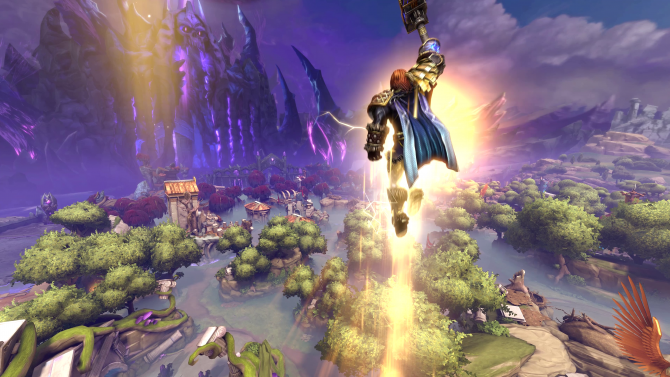 Hi-Rez Studios officially confirmed that their third-person MOBA, SMITE, will be coming to the Nintendo Switch. The announcement was made during the keynote at DreamHack Atlanta.

SMITE will enter closed beta starting January 24, 2019. Players can join the closed beta by purchasing the SMITE Founder’s Pack, which is available on the Nintendo eShop. The game is free to play, but buying the Founder’s Pack grants you all playable characters now and in the future, Dashing Deceiver Loki, Dragon Empress Scylla, and 400 gems (in-game currency).

The Founder’s Pack is available for pre-purchase starting today. SMITE will also have cross-play and cross-progression starting next year. Players can access their account between the PC, Xbox One, and Switch no matter how and where they play. The game is also on the PS4, but there’s been no word on cross-play with Sony yet.

SMITE will be a free to play game on the Switch (as with all platforms). It’ll be the handheld hybrid’s second MOBA title following Arena of Valor. Nintendo and Hi-Rez Studios should do well with this release, as free games on Nintendo’s eShop usually do pretty well. SMITE has a professional esports league, and the cross-play between consoles should allow players to queue up quickly.

DualShockers reports that A.J. Walker, the Lead Designer, said that cross-play would not be available in Ranked Conquest by default. Rather, a separate control mechanism with the Console League and PC League existing as separate events.

You can check the SMITE trailer for Switch below: