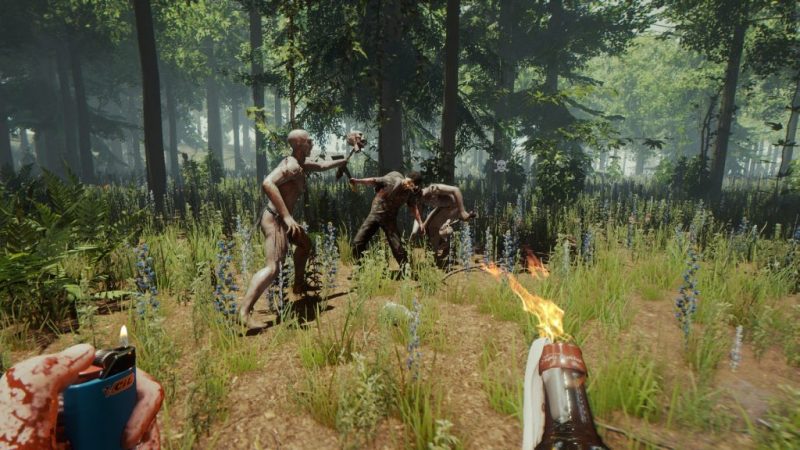 The Forest is coming out of early access on Steam some time in April 2018!

If you’ve never heard of this game, it’s basically a survival game that takes place in a huge world filled with some spooky monsters. You have to gather resources, establish a base, craft weapons, harvest food, and explore the giant map freely at your own pace.

The game takes place with your character having ditched a plane crash and now you’re stuck somewhere in the wilderness looking for your son. You get a glimpse of some giant man taking your son off into the woods, so you need to go look for him on this mysterious island. Of course, you won’t be able to just find him. It’s a whole expedition and will require many days of exploration, which means you need to establish shelter, food, and get your basic necessities so you can continue looking for him.

The game has tons of lakes, ponds, caves, forests, and villages for you to gather loot from. Like pretty much any survival game these days, you’ll have to fend off attackers. Instead of it being other players like in Rust and Ark, you’ll have to defend yourself from these monsters that’ll attack your establishment and eventually you yourself. It’s considered to be a horror survival game because the enemies you face do indeed look freakin’ creepy. The environments you explore are also filled with these monsters as well. There’s even a day/night cycle and a weather system as well. The game is basically a horror survival game taken to the extreme. It’s like playing Rust with a horror mod or something.

The Forest came out in May of 2014 in early access and has made some significant leaps in progress since then. Now, it’s ready for a full release almost 4 years later. The developers have decided to release the full version of the game on PC this year. It’ll be released with patch 0.73 which contains a few updates, patches, and fixes.

Like most games, The Forest will get a price bump for the full version. It’ll jump from $14.99 to just $19.99- a modest $5 increase. If you’ve been eyeing this game, or if you like horror survival games, you’ll definitely want to check out the game on Steam.