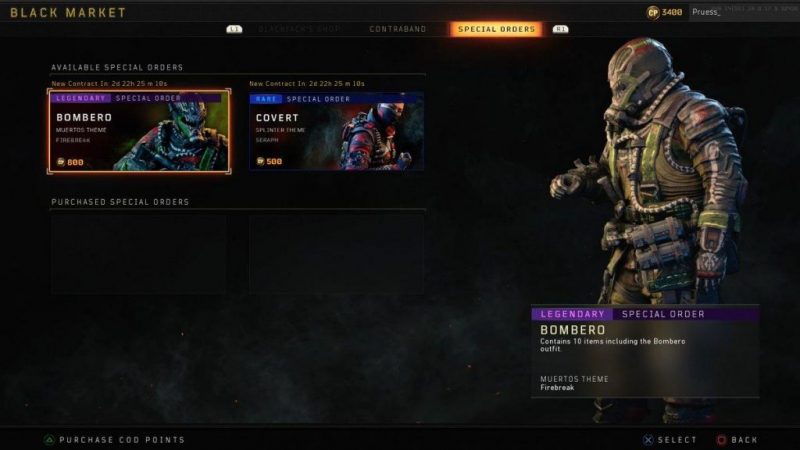 Call of Duty Points (CoD Points) are now live in Black Ops 4. They can be purchased using in-game interface or via the PlayStation 4 Store. The currency is currently only available on the PS4 and will debut on the Xbox One and PC later on November 7th due to the 7-day exclusivity agreement Sony has with Activision.

CoD points can be used to purchase Special Orders or buying tiers of in-game events like Operation: First Strike. They can be used in two ways at the moment and will likely expand to fulfill other purchases later on. There are currently two Special Orders on the Black Market, which are Bombero (800 CP) and Covert (500CP). They include a series of cosmetic items like skins for weapons and outfits.

Special Orders are just temporarily in the Black Market and will be on rotation to be replaced with others, so act fast if you’re interested in getting the rewards. Players can also use their CoD Points to buy tiers in Operation: First Strike to unlock was offered in higher tiers sooner rather than griding out the hours.

Each tier costs 100CP and all tiers must be bought in order. Players must buy all of the locked tiers that come before each tier, so the cost will increase exponentially. Tier 200 from Tier 1 costs 20K CoD Points.

The max tier of the First Strike is 200, and additional tiers will show afterward. Players need to work their way up the tiers to unlock the “hidden” tiers- up to 250 with 25 at a time.

Players can buy CP with real-life cash in-game or via PS Store. All CP leftover from the previous Call of Duty games can be transferred to BO4 and all players who bought the Blacks Ops Pass will get 1000 CP with 300 Nebulium Plasma. Players who bought the Digital Standard Edition or Digital Deluxe Edition, Digital Deluxe Enhanced, Pro Edition, or Mystery Box Edition will get their extra CP in-game with various amounts.

Treyarch is a little late with the CP going live– but better late than never.