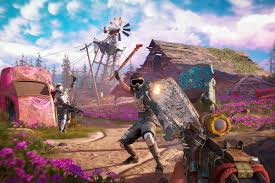 Far Cry New Dawn will have some RPG-inspired gameplay mechanics, which is the first time ever in the entire series.

The trailers released so far for New Dawn don’t really show off the RPG mechanics, but Ubisoft has decided to step out and explain what it means for their new RPG shooter. Creative Director Jean-Sebastien Decant pointed out that the game will have some “light RPG” elements that the game will feature throughout the storyline. Decant states:

“You’ll be able to craft guns that have ranks, and these guns will be useful to fight against enemies that also have ranks.”

You can also upgrade your “base” by using in-game resources, which adds a “player housing” kind of thing, though it’s not anywhere in terms of a full-scale MMORPG. Upgrading your home base will unlock upgrades for later on as you progress through the game. Crafting weapons, equipment, and more will upgrade them to scale with enemies who get progressively more difficult in the late game.

Decant posted a new video on Twitter that highlights some of these features during a QA session when they were constantly asked: “What game mechanics changed over Far Cry 5?”

He also briefly talks about the escalation system, which lets you occupy an outpost or squeeze it. Occupying an outpost liberation allows you to get locals to move in and provide a stream of resources for you to utilize.

Squeezing the outpost gives you a profit of resources upfront but enemies can overtake the outpost, which then makes the outpost more defensive and offers a greater sum of resources. Thus, players will want to take over other outposts to get the incentive resources.

Kinda weird terminology, but I’m sure players will get akin to them quickly.

Far Cry New Dawn releases next month on February 15 on PC, PS4, and Xbox One.