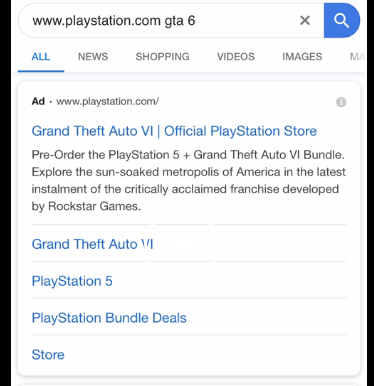 GTAV was released back in 2013 and Rockstar has been silent ever since. They’ve been experimenting with GTA Online, but as for the next entry into the series (GTA 6), we’ve seen nothing but fakes.

Rockstar has been busy with RDR2 and haven’t spoken about the next GTA yet. Other than some outrageous fakes announcing the next Grand Theft Auto 6, there has been no solid confirmation from Rockstar.

However, a short phone recording through a mobile device showing an ad on Google search for GTA 6 has fans playing detective.

Could this be legit? There’s currently no solid evidence that this is indeed fake yet. After all, it’s a video rather than a still screenshot. And it’s done a phone, which makes modifying text a lot more difficult than using developer tools on a desktop.

But then again, you have hardcore fans everywhere. Or just trolls.

The ad says to “Pre-Order the PlayStation 5 + GTA 6 Bundle.”

YouTuber ZacCoxTV describes this short recording in detail. Some players have been finding a new ad on Google search regarding a PlayStation bundle that advertises GTA 6.

For those unaware of how Google Ads work, the developer/publisher needs to choose an ad “start/end” date. The ads won’t show unless the campaign goes live. There should be no reason why Sony would start advertising a bundle with the game, especially since there has been zero hype built around it yet from their confirmation. Maybe they chose the wrong dates? Perhaps Sony was testing it? Or was it done intentionally just to drum up the internet once again?

The ad is in Spanish, which brings the user to the PS site when clicked on. There’s a brief snippet about the bundle gamers can expect to receive with Project America’s codename used from prior speculation.

On Reddit, people have been discussing this recording and some say it’s fake. Others say it’s not possible to fake on a mobile device. And there’s always the “fake ads” that people put on, as almost anyone can start a Google Ad campaign and put in whatever site.

What do you think?