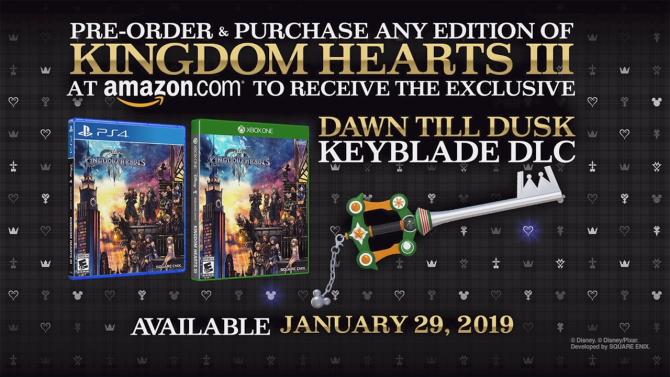 The Keyblade is a variation of the classic Kingdom key design. There’s a green overlay on the usual gold-tinted handguards and sun/crescent moon design on the top side. This may be a simpler version of the Kingdom key and may have special stats in-game. This is yet to be revealed.

Players who want this Keyblade will have to pre-order or buy Kingdom Hearts III before its release or on its release on PS4 and Xbox One on January 29, 2019. People who buy it after won’t be eligible for getting this exclusive Keyblade, and it’s only available for Amazon purchasers.

Amazon Prime members will also get a $10 credit for pre-ordering KH3. This can’t be used to take $10 off the game, but rather can be used to buy anything else on Amazon (what do they not have?). The game has already been confirmed and this really happening. After many years of waiting, we’ll get to see the next Kingdom Hearts game to create the KH trilogy!

Some new trailers have been released showing off characters from Tangled and Winnie the Pooh.

For players who want the exclusive Amazon Keyblade, they can order the game on Amazon. This is pretty awesome, but then again, some players have had KH3 on pre-order for many years now on Amazon and all they’ll get to show for it is a rusty DLC Keyblade. But it’s better than nothing! Seriously!

Kingdom Hearts 3 has gone gold, so the game will be coming out no matter what. Unless there’s some terrible delay, fans will finally be able to experience the next entry into the legendary series that they’ve waited so long for.