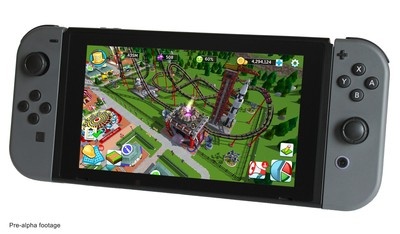 Atari has started a crowdfunding campaign to bring the classic theme park builder RollerCoaster Tycoon to the Nintendo Switch.

Everyone knows what RCT is. It’s probably one of the best strategy tycoon games of all time. If you haven’t heard of it, you must’ve been detached from the videogame world for quite some time (or you’re new to gaming in general). It was a very addicting game and has consumed many, many hours of my childhood (and millions of others).

The campaign is hosted on StartEngine, which many won’t be familiar with. Atari is looking for $10,000 to $1.07 million. That’s a pretty big range.

The game will be developed by Nvizzio Creation, who also made the F2P RCT Touch version. The version that they’re making shouldn’t have any mobile cash-grab gimmicks like the F2P version does. It should be a fully fleshed-out RCT game for Nintendo Switch.

If you donate to their campaign, you get some perks for this game and future developments as well.

The game is said that it’ll be an original game that’ll utilize the Switch’s portable functionality and home capabilities as well. It’ll also come with exclusive features just for the Switch. Confrimed features include a career mode, sandbox mode, and scenarios. So far, these aren’t anything special as they’ve been available since the beginning of the RCT series.

We’ll have to watch out for this one. It could be the next awesome RollerCoaster Tycoon game.