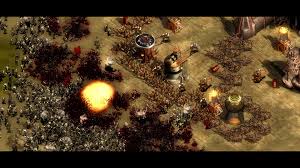 They Are Billions is coming to console next month.

The zombie RTS game will be ported over to PS4 and Xbox One. The port will be done by Blitworks, who has also worked on games like Super Meat Boy, Bastion, and Spelunky.

The announcement trailer for the port to consoles has been released, and you check it out at the end of this post.

The team announced that the game will be coming to console right after they announced a new campaign mode. Seems like they have plenty of content to offer for the zombie builder, even after the length of time that the game has fallen off popularity charts.

Porting the game over to consoles should be quite challenging, as real-time strategy and controllers don’t go well together. Blitworks seemed confident, as they mentioned that They Are Billions works “comfortably with a controller,” which may or may not live up to player expectations.

I can only imagine using the joysticks on the controller to try to micromanage my structures quickly. This will definitely be a feat for them to pull off.

However, with the pause feature, this will definitely come in handy for console players.

Hardware limitations may be the other problem. On PC, the game can get up to thousands of units on screen at once- in fact, 20,000 units total. How this will be possible on a console will be a surprise. Slimmed down graphics? Limited unit population? Smaller draw distance? Not sure, but we’ll see.

As for the campaign mode, we probably won’t see this. We’ll just see the basic survival mode and maybe later we’ll get The New Empire on consoles. We didn’t see any mention of this anywhere on the PS Blog so far, but stay tuned.

For console players who’ve been missing out on this zombie RTS, now’s your chance to check it out!