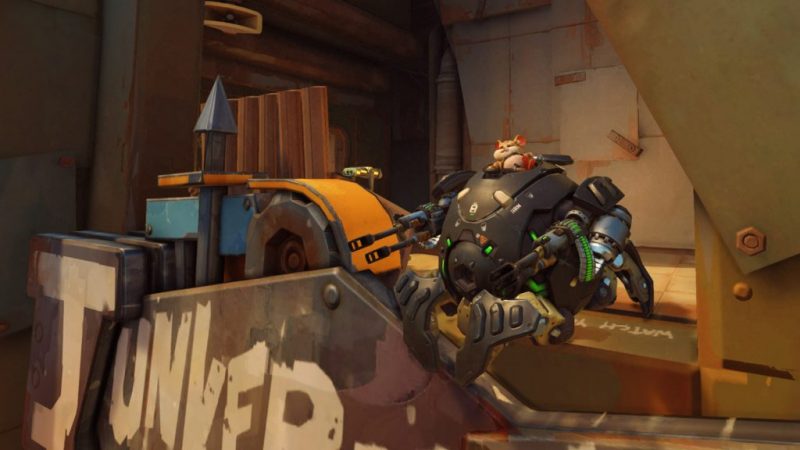 Wrecking Ball will join the cast of Overwatch on July 24, 2018, based on a Tweet from the official Twitter account. Every year, Overwatch gets three new heroes to join the craze on almost a scheduled basis. Wrecking Ball, aka Hammond, is the newest of the bunch.

He’s just been placed on the Public Test Realm for players to mess around with. Originally, he was announced back in late June. His origin story video shows off that he’s pretty much a vermin in a mech similar to how Rumble is in League of Legends.

Wrecking Ball is a hamster if you want to be specific. He’s one of many genetical experiments that have taken place on Horizon Lunar Colony. He tied his escape pod to Winston’s shuttle as it launched for the earth and landed on the Australian outback. He then fought in mech battles in Junkertown and now he’s one of the bets.

He’s considered to be a tank and has abilities suitable for his role.

His primary weapon is his Quad Cannons which provide offensive firepower and he can also tuck into a ball for faster speeds. Players can also use a grappling claw in ball mode to slam into enemies or quickly get better positioning.

He also gets an adaptive shield which grants him a shield HP gain depending on nearby enemies. Piledriver allows him to slam his mech into the ground like a semi-ground pound from Mario. Minefield is his ultimate and deploys proximity mines all around him which is perfect for zoning enemies in the nearby area.

You can check out more info about Hammond here. He’ll be live for official play on July 24. Welcome to the gang, Hammond!