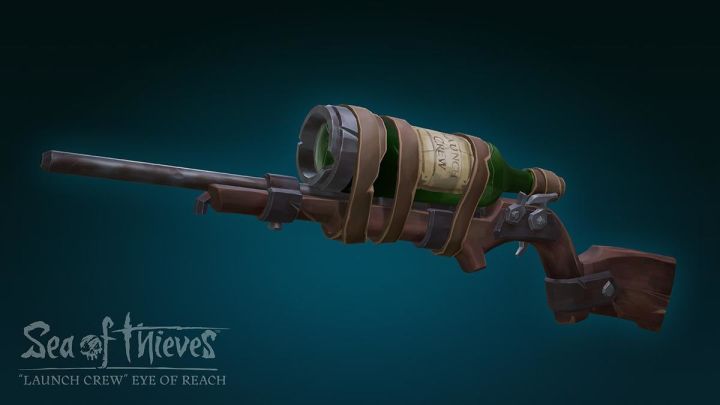 the newest update to Sea of Thieves adds a new limited-edition rifle. And it’s awesome.

It’s a “launch crew” rifle added in the 1.0.6 patch. Specifically, it’s called the “Launch Crew” Eye of Reach rifle for only the next two weeks. It’s a founder’s edition rifle and will cost just one Gold, according to the forum.

Rare has also reduced Skeleton accuracy when shooting cannons from stands at long distances. Regional stock is also being changed with shopkeepers in different regions now only having specific item sets. This will help reduce mistimed deliveries. The bell on the small ship has been moved to the other side of the ladder as well. This is to reduce accidentally bell-rining. Rare also changed the position fo the ammo crates on the sloop and galleon.

There will also be new cosmetic outfits as well. Rare also address the flying ships bug and other issues as well.

There are also a few other quality-of-life improvements in the patch. See the full patch notes post for more details.

Sea of Thieves will be getting weekly new content as well. It’s a good time to be a pirate indeed. 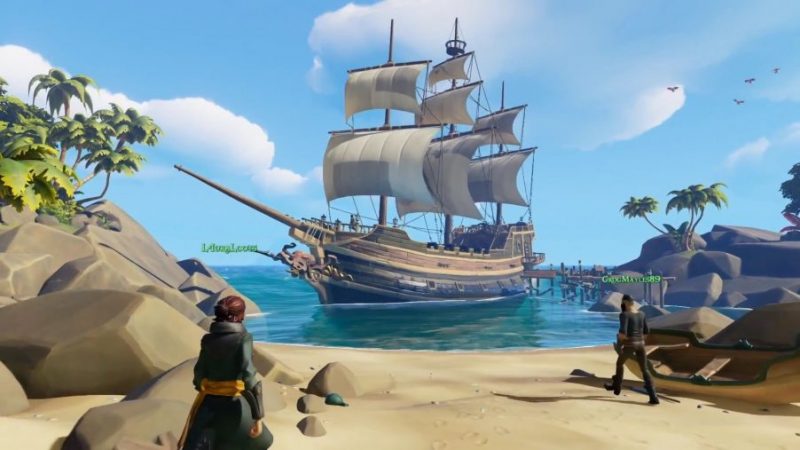 Sea of Thieves is finally getting a much-needed content update!

After being criticized for being a sailing simulator with nothing to do, Rare has decided to release a roadmap of what to expect in the next coming months. It’ll get a few updates, three of which are already announced to let people know that it hasn’t abandoned the project.

The first update will roll out in May which will be called The Hungering Deep and brings a new epic boss for players to take down. It’ll require multiple parties to discover and defeat the threat together. The spiles will be a plenty!

The next update is called Cursed Sails and will roll out in Summer 2018. This update brings a new type of ship to the game and also another epic boss. The expanded ships will allow you to change how it looks and functions as you scale the sea. It’s not just a single ship, it’s a whole ship type.

The last update is called Forsaken Shores and is probably the biggest one. it’ll add a whole new area to sail and new enemies to fight as well. There will be new rewards that are themed to that part of the world and a new gameplay mechanic. This is the big one.

There will also be three more updates coming later on, but none of the hems have details yet. Weekly events will be introduced to the game to teach players the new mechanics and events between updates. This will also help them explore existing locations via quest or fetch missions. Getting a chest from a boring local or getting an item from an NPC in the middle of nowhere both help facilitate players to new places they wouldn’t otherwise go before the updates were added to the game. It’s a way to get players playing.

All updates will be free as well, so Rare will be backed up in developement for thigns like pets and ship captains.

Sit tight for updates on the way, captain! 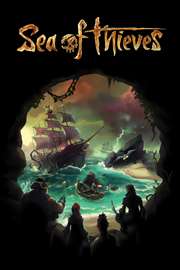 Some users in a Reddit post have gone through and data-mined Sea of Thieve’s code to discover what features are coming up next based on a report via VG247.

If you haven’t heard about this game, it’s developed by Rare and is probably the next big MMORPG. It’s a pirate-themed online experience complete with combat, boats, and everything that entails a pirate on the seas. How could you have not heard of it?

Spoiler alert: Those who don’t want to get their goods spoiled should stop reading here.

Some notable discoveries in the code include:

The beta will run until January 31st, so there’s still some time to mess around with the game. Or if you’re already all-hands-on-deck about it, you can pre-order it right now on their official site. The launch is scheduled on March 19, 2018 and will retail for $59.99. And it’ll be available for just Xbox One, Windows 10, and Xbox One X. It’ll also have Play Anywhere included.

You can get more info on their site.

Image via Sea of Thieves site.