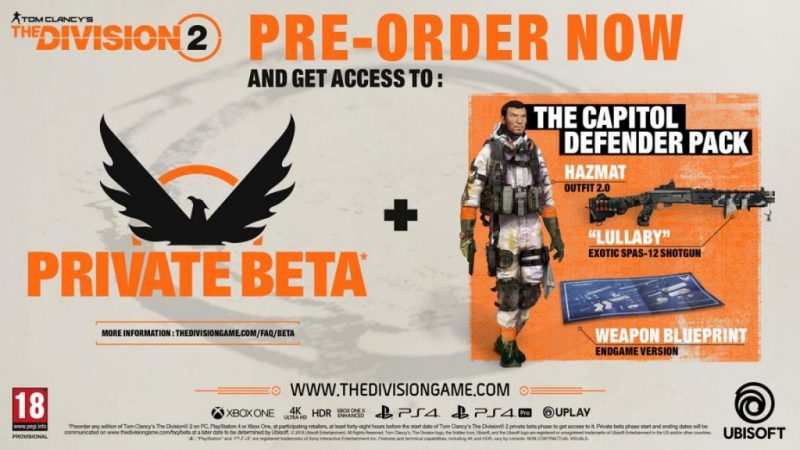 The Divsion 2 has been confirmed for a private beta for folks who pre-ordered the game.

A new story trailer has also been released for the upcoming game from Ubisoft. Tom Clancy’s The Division 2 will be rolling out on March 15, and the private beta will run from February 7-10. The game will take place in Washington, DC after the epidemic has hit. Hard.

The trailer shows off some gameplay footage that was also presented during the Microsoft E3 2018 show. The content in the story trailer follows up on earlier content and provides a basic plot for the game. Players will face three enemy factions, which you can find out more at the end of this article (with the story trailer).

The Divsion 2 will have new specializations, an improved UI for loadouts, settlements, looting, gameplay enhancements, and even 8-player raids. And this is just the beginning.

The story trailer was released at the same time the private beta would take place, so fans have a lot to look forward to. Ultimate or Gold editions of the game for PS4, Xbox One, or PC through the Epic Games Store will grant you access to the beta. However, if you bought from other stores like Steam, your access will still be honored. You can also get it directly from Ubisoft via UPlay.

For those who didn’t pre-order, you can still have a chance to get into the private beta for The Division 2 if you sign up quickly.

Here’s a rundown of the enemy factions in The Division 2 (via Ubisoft):

And here’s the new trailer: